A few years ago we got Michael
a dog for Christmas and named him “Bogart”. Bogart came from Kelly Raichert and is a cross between a lab and a husky. Up to this point I have kind of thought he was a lovable, curious nimrod. Jason on the other hand is always telling me how smart he is. It’s been a big debate mostly because he digs holes in my yard. But here it is, in print for all eternity. Jason is right. The dog is smart. On Friday, Jason told me Bogart came and got him and took him to the shed out back. Then Bogart proceeded to sit in the doorway and look at him. Jason said he knew he wanted something and was trying to tell him but he couldn’t figure it out. It happened again on Saturday – a trip to the shed and then sit there and look at Jason. Jason couldn’t find anything. But along the one wall of the shed is all of the leftover siding and shingles and some tile from house repairs, so maybe something
was back there. On Saturday night, we had already gone to bed when Aubrey
comes in with a starving baby kitten and she’s all upset. She had found him out the back door. The indoor cat had been hissing and Bogart was outside making a fuss so she had gone to investigate. So we got up and went out to check it out. There were now two more kitties and they were sopping wet. The dog is standing there with his paw on one of them keeping it from moving. Aubrey gets mad at the ‘dumb’ dog and is crying because she thinks he is trying to hurt the kitties. Upon examination
it doesn’t appear he has hurt the kittens and we don’t see anymore kittens so we take those in. Only to hear Bogart at the back door again. That darn dog. He was rescuing
those babies. He carried them one by one in his mouth without injury- all six of them- to the back door. They were in poor shape and hadn’t eaten in some time. I am still not sure they will all live. But had Bogart not taken the matter into his own mouth – they certainly all would have perished. He had to do quite a bit of work to dig the shingles and siding out to make a path big enough to get back there and rescue them. Jason said it makes sense now. Bogart knew they were in trouble and was trying to get Jason
to help. But Jason couldn’t hear them. On Sunday, we went to Orschlens and bought some kitten formula and a couple of little bottles. When we came home we had all of them in a box on the front steps and here comes Bogart. You had to assume he wouldn’t hurt them since he had rescued them to begin with. He didn’t let me down. When he bent over the box to see them, he started licking
them, gave them a bath, and cleaned them up. Bogart has chased every rabbit
in the area, and he’s treed a few of the bigger, wilder cats. But he’s been a good watch dog and pretty observant of what’s gone on around the place. I suppose that’s why Jason says he is so smart. One thing for sure, he must have had his eye on the abandoned kitty situation
for a few days. And finally decided he was going to have to do more to get our attention to help them. It amazes me that he worried about them and that he brought them to the back door. We had a momma cat do that with her kittens all the time when I was young. But seeing a dog do it, is something special. If you are in need of some cute kittens, we are going to have some to give away in the next few weeks. You just know after surviving all of that, they are destined to be very special. 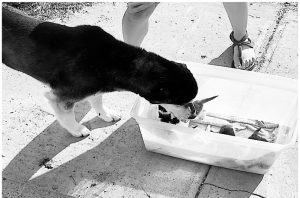 Bogart cares for the kittens

Posted in Barking with Bogart

A Mudhole for a Bath Plan

Hello from the Dog House