We have had more people comment
on the “Bogart Chronicles” the last couple of weeks than I would have ever imagined.
It’s really been fun interacting with the community and hearing other dog and pet stories.
I got a kick out of the letter to the editor that we received from “Lucy” this week. Lucy’s mom and dad are subscribers to the paper.
I kind of like her idea of starting a support group. I think we will call it “Barking with Bogart” If your pet would like to submit a letter to Bogart about life concerns or the problems people or other pets are causing. Please email it to us at bpost@bwtelcom.net and we will try and print.
We need the pet owners name in the email but if you don’t want your name printed your pet can just have his or her name printed.
Bogart will try and respond. I think it will be kind of a fun thing to have in the paper if we can get readers  to join in and submit letters.
It’s been a busy week at our house. Grace is going to be a senior
and so we have been visiting colleges. Jerry, Cindy, Amy, and I went on a road trip to Peru on Friday with Grace and toured the school. It’s a nice campus and if Grace keeps with the current plan to go into elementary education it would fit the bill perfectly for her.
It’s a little far away from home and she’s not quite ready for that yet but she’ll get there.
Thursday night I took Michael and some boys over to Wauneta for a pick-up game of basketball. Always fun to watch the boys play summer ball. It’s a little different type of ball in the summer because they aren’t quite so serious and you see them just being goofy teenage boys playing street ball.
When Michael and I got home I might have been in the dog house with Bogart because we were later than anticipated. I asked Amy what was for supper and she told us she was going out to feed her fish that she’d already cooked supper. At least this time I was late because I was with Michael, usually I lose time fishing – actually my sibling’s joke is I’ll be late to my own funeral)
So Michael and I had to fend for ourselves. We lit the grill and threw a couple hamburger patty’s on. Since Amy was a little grumpy Michael and I had to find a way to get back in her good graces. Everyone knows the best way to get on Mom’s good list is to play with their food?!! So we made hamburger Happy Meals. Complete with onion eyes, a tomato nose, a pickle tongue and a big yellow mustard smile. She laughed and I think said something about being married to an overgrown eight year old. She still thinks I am young and I can still make her laugh! Life is good.
Have a good week! 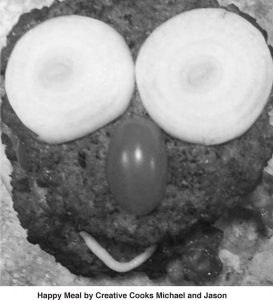 Posted in Barking with Bogart

A Mudhole for a Bath Plan

Hello from the Dog House