Just how dominate was the Dundy County Stratton Tigers football team in the 54 to 28 win over the 4 and 1 Hitchcock County Falcons on Friday night? Of the Tigers first eight offensive plays, four ended up as Tiger touchdowns. That came against a Falcon team who had only allowed one touchdown in their last four games.

The Hitchcock County Falcons football team knew they were going to have their hands full in Benkelman with one of the top teams in Class D1 on Friday night. The Falcons were playing well, especially on defense, over the last month, but they hadn’t seen a team with the speed of DCS all season.
Hitchcock County started the game by moving the ball on offense, but the drives stalled once the crossed mid field. To have a chance against the Tigers, you have to finish drives with touchdowns.
DCS scored twice in two offensive positions in the first four minutes of the game. The Falcons did keep them out of the end zone on both of the Tigers 2-point conversion tires, but were still down 0-12.
The Falcons got on the board on their third position of the first quarter on a 15-yard run by quarterback Dionte Perkins. The Falcons failed on their 2-point conversion, but made the score 6 to 12 with 7:07 left in the opening period.
The Tigers wasted little time to get back into the zone, scoring just 23 second later. This time they got the 2-point try to take a 6 to 20 lead.
The Falcons moved the ball again on offense, but the drive stalled in Tigers territory. DCS capitalized with 1:45 left in the period on a 70-yard run. They took a 6 to 28 lead at the end of the first quarter.
DCS pushed they lead to 6 to 34 before the Falcons reached the end zone midway through the second quarter on a good 30-yard touchdown run by Pierce Utterback to make the score 12 to 34. The Falcons didn’t reach the end zone again in the first half and their defense didn’t have answer for DCS’ offense. The Tigers scored three more times before the break to take a 12 to 48 lead.
The Tigers scored for the final time of the game with 5:37 left in the third quarter to increase their lead to 12 to 54.
The Falcons kept fighting and were able to finish the game with two touchdowns in the fourth period to make the score respectable at 28 to 54.
After the game with the Tigers huddling at center field, the players cheered “one more game, one more game for a District Title”.
That game is a much anticipated battle with the undefeated Cambridge Trojans in Benkelman on Friday night.
If the Tigers win, they are the Class D1-9 District Champions with a regular season game against a Southwest squad that hasn’t won a game.
In the game against Hitchcock County, the Tiger offense ran a total of 38 plays for a total of 464 yards in the game. They ran the ball 33 times for 371 yards and were 3 of five passing for 93-yards.
The Falcons ended up with 383 yards rushing and 4 yards passing.

Pierce Utterback led the way the the Falcons with 204-yards rushing on 26 carries and 1 touchdown. 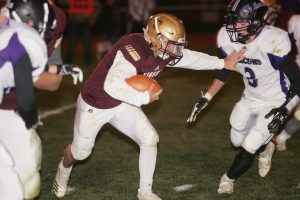 DCS Quartback Quade Myers breaks away for a big play in the game against Hitchcock County.

Quarterback Quade Myers led the way for DCS having a hand in all eight of the Tigers touchdowns. He finished with 13 carries for 240-yards and 5 touchdowns rushing the football. He also completed 3 of 5 passes for 93-yards and 3 touchdowns. Two of those touchdown receptions went to running back Serbando Diaz who finished with 73 receiving yards. Diaz also ran the ball 10 times for 87-yards.