Many Benkelman area youth will dress up in their Halloween Costumes two times next week.
The Dundy County Stratton FBLA will host their annual Spook Parade and Pumpkin/Costume Contest a few days before Halloween this year.
Halloween is next Thursday, Oct. 31. The FBLA events in downtown Benkelman will take place on Tuesday, Oct. 29.
The reason for the change is because the DCS High School Football team will play their first round playoff game on Thursday, Oct. 31. The time and location of that game will not be known until after the playoff seedings are released after the final regular season games are played Friday night.
In order to avoid conflict it was decided to move the Spook Parade.
The FBLA will start taking entries for the Pumpkin and Costume Contests at 3:30pm on the side of the Dundy Courthouse grounds. Pumpkin and Costume judging will be conducted in six divisions: Preschool, Kindergarten-First Grade, Second Grade and Third Grade, Fourth-Fifth Grade, Sixth-Eighth Grade, and Group. Prizes will be awarded for scariest, funniest, cutest, and most creative. There is also a prize for best group in the costume division.
The Spook Parade will begin at 4:15pm in front of the Zorn Theatre and head down Chief Street. 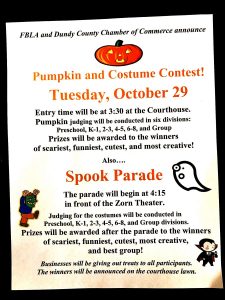 The pumpkin and costume contest winners will be announced on the courthouse lawn. The Dundy County Chamber of Commerce is providing the prize money.