The Hitchcock County Falcons Football and Volleyball teams’ seasons ended earlier then they wanted.  The football team lost in the first round of the Class D1 playoffs Thursday afternoon at Burwell.  The Falcons showed they belonged in the playoffs with a strong first quarter effort against last year’s Class D1 State Runner Up and 2016 State Champion.  Hitchcock County lead 8 to 6 and the trailed Burwell at halftime 8 to 20.  The second half was all Burwell as the built an 8 top 48 lead before the Falcons reached the end 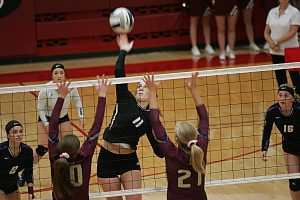 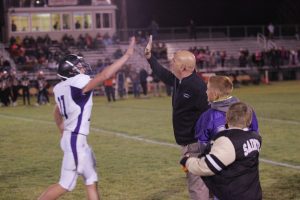 The Falcons have nothing to hang their heads about as this was the first time in school history the Falcons reached the playoffs.  They finished with a record of 5 wins and 4 losses on the season.  Read more about the game in next week’s issue of the Hitchcock County News.

Meanwhile, the Hitchcock County Falcons Volleyball team started post season play with a win in the first round of the Class D1-11 Sub-districts over Dundy County Stratton on Monday, 27-25, 25-21, 20-25, and 25-17.  With the win the Lady Falcons moved to the sub-district finals against Cambridge on Tuesday.  Hitchcock County took the opening set against the Lady Trojans 27-25, but then lost the next three 21-25, 19-25, and 15-25.  The Trojans took the match and moved on the Sub-State District Finals match to be played Saturday.  The Lady Falcons season ends with a winning record of 18 wins and 12 losses.

Look for photos of the Falcons Volleyball and Football teams on the scoopmedianews.com website.