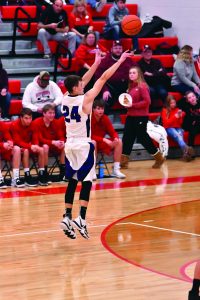 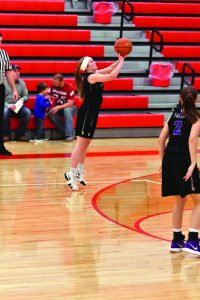 Kailee Kolbet tries a 3-pointer in the first night of games at the Brady Tournament. Kolbet and her teammates advanced to the championship round with a win over the hometown Eagles 54-47. Kailee is the daughter of Tammy and Aaron Kolbet. (Photo by Chris Rippen) 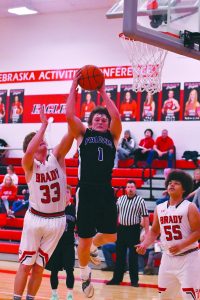 Braydn Hutto pulls down a big offensive rebound during the opening round of the Brady Tournament against the hometown Eagles. The Falcons used strong 2nd and 3rd quarters to get the win on Friday 64-48. Braydn is the son of Stacey and Eric Hutto. (Photo by Chris Rippen) Box Score: HC 8, 19, 25, 12, Brady 16, 10, 11, 11 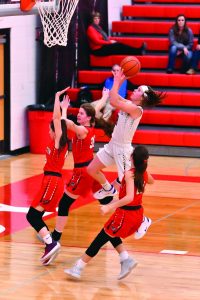 Kass Kisker lays it up and in through three Bulldog defenders in the championship round of the Brady Tournament against Pleasanton. The Bulldogs topped the Falcons 33-61. Kass is the daughter of Linnette and Kurt Kisker. (Photo by Chris Rippen)