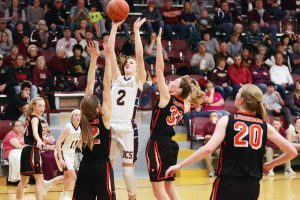 DCS’ Haley Davis hits a short jump shot for the Lady Tigers in second half against Chase County. 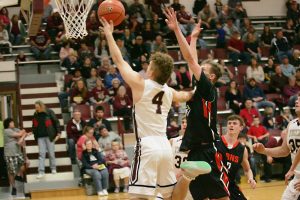 DCS Senior Dominic Sis holds off the Chase County defender for a lay up.

The Tigers were down two starters that included their top scorer, against a very good Chase County team last Tuesday night. None the less, the Tigers were still confident that with a young team with some good depth, they could still keep their undefeated record in tact.
The Tigers played really good defense in the first half and kept the game close. They were down 8 to 14 at the end of the first quarter and had a chance to get to within 3-points from the free throw line with less then 3:00 left before halftime.
DCS missed the free throws and Chase County finished the quarter on a 8-point run to go into the locker room with a 13 to 26 lead.
The second half was all Chase County as they out scored DCS 12 to 25 in the third quarter and 13 to 20 in the fourth period. The Longhorns ran away with the win. 38 to 71.
The Tigers didn’t get anyone into double figures with Cade Lutz leading the way with 9-points and Keegan Krutsinger adding 7-points. Damon Latta had 5, Dominic Sis 4-points, Nolan Burrell and Lincoln Waters 3-points each, Andrew Englot, Major Marlin, and Cheve Lutz had 2-points apiece, and Alex Englot finished with 1-point.
The loss dropped the Tigers record to 8 wins and 1 loss on the season.

Basketball games don’t get much more exciting and entertaining than the Tigers game on the road against the Wray Eagles on Saturday.
The Eagles put a squad on the floor that are as quick a team as any school of size in the area. They are a much improved squad from recent years and they have some shooters to go along with their fast play.
The Tigers had the full team and regular starters on the floor for this game and they needed everyone.
DCS was playing catch up in the game from the opening tip. Wray jumped to a 9-point lead over the first 4-minutes of the game. The Tigers then charged back, behind the shooting of sophomore Nolan Burrell. DCS got to within 3-points, only to have Wray push their lead back to 8-points by the end of the first quarter 15 to 23.
The Eagles pushed their lead to as many as 15-points in the second quarter. The Tigers had trouble with Wray getting offensive rebounds. DCS was also in foul trouble with Wray getting many points from the free throw line.
The Tigers put a run together before halftime and were only down five-points in a high scoring first half, 37 to 42 at the break.
The Eagles hot shooting cooled off in the third quarter as the Tigers picked up their defensive intensity. Wray still led by 6-points going in to the final period 49-55.
The Tigers grabbed the momentum in the fourth quarter and got their first lead of the game on a 3-point shot from senior Michael Frederick midway through the period. DCS never trailed again, out scoring Wray 27 to 14 in the final period to get the win 76 to 69.
After missing the Chase County game with an injury, senior Michael Frederick had 28-points against Wray. Burrell also had his biggest game of the season with 18-points. Junior center Keegan Krutsinger was a beast inside for the Tigers, especially in the second half. Krutsinger muscled his way to 17-points and 8 rebounds. Krutsinger’s size and power is a match up nightmare for teams. Seniors Damon Latta and Cade Lutz also hit some big shots in the game. Latta finished with 5-points and Lutz 3. Junior Lincoln Waters and freshman Corbin Horner also had good games defensively and pushed ball up the court against Wray’s full court pressure. Waters had 1-point and Horner 2-points for DCS. Quade Myers was the other Tiger player to score with 2-points.
The Tigers shot 54 percent from the field in the game, hitting 31 of 57 shots.
The win improved the Tigers to 9 wins and 1 loss on the season.

The Dundy County Stratton Lady Tigers picked up an impressive win at home against the Class C1, one loss, Chase County Lady Longhorns last Tuesday night.
DCS jumped out to a quick 8 to 1 advantage and led 14 to 7 at the end of the first quarter. Junior Maggie Lutz scored 10 of the Lady Tigers first period points.
The Lady Tigers pushed their lead to 21 to 7 with 5:00 left in half. The score at halftime was 32 to 11.
DCS was very patient on offense in the first half as they worked for open shots against Chase County’s zone defense. The Lady Tigers on defense went with a box-in-on defense with senior Sable Lambley guarding The Longhorns top player Mallie McNair. Lambley took McNair completely out of her normal game. The Lady Tigers other four defenders didn’t give up many easy shots either and Chase County struggled to get any consistent offensive production in the first half.
The Lady Longhorns were too good of a team to not make a run to try and get back into the game. That run started midway through the third quarter. Chase County went on a ten point run, holding DCS scoreless for about a five minute period from about 4-minutes left in the third quarter to the 7-minute mark of the fourth quarter. The Lady Longhorns got to within 40 to 29, but the Lady Tigers regained control.
DCS was ahead 52 to 39 with 3:00 left in the game as junior McKinzie Baney hit several big shots.
The Lady Tigers went on to win 60 to 43.
Baney and Lutz led the way for DCS with 16-points apiece. Sabley Lambley added 11-points to go along with a great defensive effort in the game. Jessie Freeland added 9-points with some sharp shooting from the outside. Sydney Reichert and Haylee Davis each had 4-points in the contest. Reichert and Lutz also came down with 11-rebounds each in the contest. The win pushed the Lady Tigers record to 9 wins and 0 losses on the season.