The Wauneta Palisade Coop has closed its doors and, for now, the Palisade Community is without a gas station and just waiting in limbo to see what happens.
The nearest gas Stations located in Hayes Center, Wauneta, Trenton are all about 15 miles away.
The News asked manager Milner on Monday if the station was anticipated to reopen or up for sale and he responded to both questions that its difficult to say because there are so many things open to interpretation. “I really wish I could talk and get something out there, it’s really best until we get to a board meeting to just wait.” Milner says the next Board meeting is Thursday evening at 6 mountain and 7 central time at the Wauneta Coop. The board make up is as follows: Joe Barger, President, Cliff Church Vice President, and Board Members: Kevin Kerchal, Ivy Elliot, Jed Doetker, Tessa Stinson and Charles Milner is the Manager
Milner added “It’s a bad situation for the community.”
The Communities’ Response
Curtis Kayton, General Manager of Southwest Public Power says that about a month ago SWPPD invested in their own fueling facilities. “We got our own tank and filled it with fuel, we had to do something as it (Palisade Coop) was no longer a reliable source of fuel. We’d just as soon have a community option, that is what we have always used up to this point, but for right now we just had to do something so we could operate.
Jason Hicks, Village Chairman and Fire Chief says “It does affect us because we have no other place to get our fuel. It affects us more on the fire truck side of things. We haven’t got a really good answer to it yet. We are looking at possibly having to put storage tanks in. We aren’t quite sure what to do. Right now when we get done with a fire, we are going to have to take a fuel tank to one of the surrounding communities and bring it back to Palisade to fill everything up.”
Hicks adds, “You know, it really affects the elderly people in the community that don’t’ really leave town a lot and relied on the fuel. Those of use that are in and out of town a lot and can stop somewhere else, it hasn’t hurt as much.” E
Hicks says “It would have been nice to know they were going to do it and have a little bit of heads up instead of just putting a sign in the door and that was it, even on the heating propane fuel there are a lot of people that relied on them for that too. They’ve had to shift gears, mid winter and try and find someone to meet those needs.”
“I really hope that somebody has some foresight and gets something going and gets something accomplished in town. We always want to see a business in town,” said Hicks.
Wauneta/Palisade Superintendent Randy Geier says that the Palisade station closing has a definite adverse affect on the school district, and they are bringing buses and suburbans to Wauneta to fuel. “Our employees have really stepped up and have gone above and beyond to help keep things going. We are hoping someone will be able to step up and buy it and turn a negative into a positive.”
The Future
While the future is unclear for the Palisade gas station, one thing seems clear from everyone in the community that the News talked to. A gas station is missed and hopes for a resurrection are prominent. 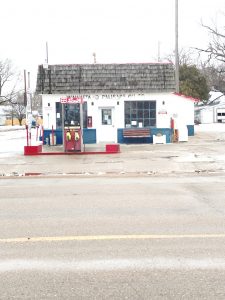