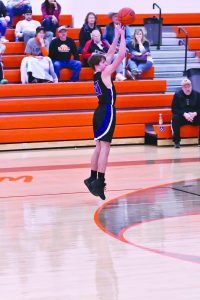 Colten Hagan tries a 3-pointer in the opening round of the RPAC Tournament against the host team Maxwell. Hagan and the Falcons used a stingy defense and their press to come out on top 66-33 and move on to a Tuesday match-up with top-seeded Paxon. Colten is the son of Bryan and Aletha Hagan. (Photo by Chris Rippen) 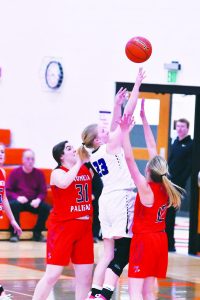 Aimee Merrill goes up for a shot between Wauneta-Palisade’s Faith Lemon and Alexa Sandman in the opening round of the RPAC Tournament on Saturday. It was the third meeting between these two teams already this season. The Falcons got another victory 48-37 and moved to play Maywood-Hayes Center on Monday. Aimee is the daughter of Wayne and Aubree Merrill. (Photo by Chris Rippen) 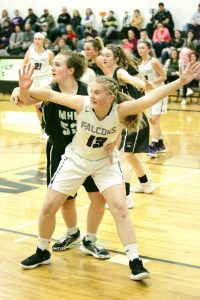 Aspen Teeter posts up inside for the Lady Falcons in the RPAC second round tournament game against Maywood Hayes Cetner on Monday. The Falcons lost the game 46 to 52 and will play Maxwell in the consolation game in Trenton on Thursday. 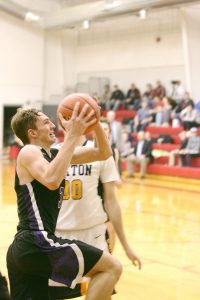 Dionte Perkins drives to the basket in the Falcons second round RPAC game against Paxton on Tuesday night. The Falcons lost 36 to 49. The Falcons out scored Paxton by 6-points in the second half. Hitchcock County will play in the consolation game against Wauneta-Palisade in Trenton on Friday. 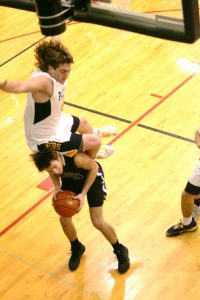 A Paxton defender fouls Colten Hagan in the first half of the Falcons game against Paxton in Hayes Center on Tuesday.