The Dundy County Stratton boys basketball team got out to a strong start in their first game of the RPAC Conference Tournament in Maxwell on Saturday. DCS earned the west division second seed and played seventh seed Maywood Hayes Center.
The Tigers jumped to a double digit first quarter lead, but Maywood Hayes Center fought back. The score at the end of the first quarter was 17 to 11 and 34 to 30 at halftime.
DCS’ turned their defense intensity up in the third quarter as the Tigers outscored the Wolves 27 to 4 to take control of the game. DCS led 61 to 34 going into the final period.
The Tigers reserve players played the final period and out scored the Wolves 16 to 9 as DCS moves on with a 77 to 43 win.
The Tigers played Wauenta-Palisade in the second round last night (Tuesday) who got the win over Wallace in round one on Saturday.
The Tigers had 12 of the 14 varsity players score in the game and were led by Michael Frederick with 16-points. Keegan Krutsinger also finished in double figures with 12-points. Corbin Horner added 9, Cade Lutz and Quade Myers each had 7, Nolan Burrell, Alex Englot, and Mark Nelms had 5-points each, Lincoln Waters, Andrew Sydow, and Dominic Sis had 3-points a piece, and Damon Latta had 2 for the game. 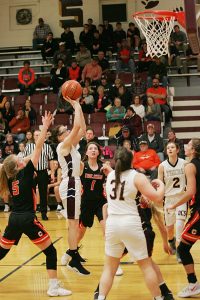 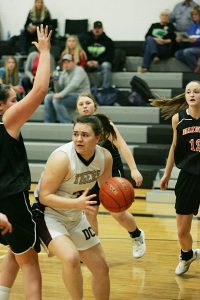 Kaylin Brown gets an offensive rebounds and looks to pass to an open teammate.

Dominic Sis drives to the basket. 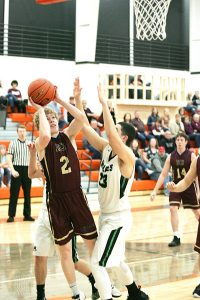 Major Marlin takes a shot for the Tigers.

Have you ever heard the basketball adage it is better to win ugly then loose ugly. That was a good way to describe the DCS Lady Tigers first Republican Plains Tournament game at Maywood on Monday.
The west division top seeded Lady Tigers didn’t play their best basketball of the season, but found a way to win against a good Maxwell team, 38 to 35.
The Lady Wildcats jumped out to an early 7-point lead in the first quarter. Even with cold outside shooting, the Lady Tigers made a run at the end of the first period to get to within 3-points at 8 to 11. Maxwell maintained their lead in the second period as DCS still struggled to find their shooting touch before halftime. The score at the break was 15-19.
The Tigers came out with a good third quarter. Junior McKenzie Baney sparked the Lady Wildcats offense with two 3-point shots as DCS went on an 11-point run. The Lady Tigers turned a 4-point deficit into a 7-point lead by the end of the quarter, 30 to 23.
Both teams struggled with turnovers and poor shooting in the final quarter, but the Lady Tigers held on to get the win.
Baney was the only DCS player in double figures with 14-points. Sydney Reichert had 9, Maggie Lutz 6, Sable Lambley 5, Haylee Davis and Haylee Davis had 2 points each.
The Lady Tigers will play Maywood-Hayes Center in the semi-finals on Friday in Trenton.