On Sundays during football season there is one place you will find the Downey family of Benkelman, watching and cheering for their favorite NFL Team, the Kansas City Chiefs.
Mike and Jeanne Downey, their three daughters and son Paul all love the Chiefs. Paul, who lives in Kearney, said his three sisters all married Chief fans. Paul who is 26, said when he turned one, his parents had a Chiefs themed birthday party for him. He said they have had a lot of family events around Chief’s games.
For the first time in 50-years, the Kansas City Chiefs made the Super Bowl. Super Bowl 54 was played by the Chiefs and the San Francisco 49ers at Hard Rock Stadium in Miami Gardens Florida on Sunday.
Paul and his dad Mike Downey weren’t going to be watching this game on TV. They were going to be there in person. They flew to Miami on Friday.
“We got there on Friday and hung out on the beach and met a lot of Chiefs fans,” he said. ‘It was reported as being one on the largest migrations of people for a sporting event in U.S. History.”
Paul and Mike bought their tickets to the Super Bowl on Saturday. Paul said they were told to wait to buy the tickets because prices usually go down. “They didn’t,” he said. “They were $7,000 a piece, but we were not going to miss it.” Their seats were in the upper deck on the Chief’s side of the field. “They were awesome seats.”
They went to the stadium at about 10am on Sunday. They parked at a casino and had a drink before heading to the stadium. Paul said the stadium it was like an amusement park. There were concerts, games, and plenty of things to do before actually going into the stadium. They also tailgated with a bunch of Chiefs fans before the game. They went into the stadiums and found their seats about 2-hours before the kickoff at 6:30PM (ET).
The Chief’s were down 10-points in the second half and Paul said they were starting to get nervous. But, just like in the other playoff games Kansas City came from behind to win. “When they scored the go ahead touchdown, it was all fives and hugging,” Paul said. “We even cried a little.”
They were at the stadium until about 10pm and then they celebrated with Chief’s fans at local bars until about 3AM. Paul said they then went and had pancakes and beer at a restaurant.
“It was awesome, the best experience I have ever had. It fulfilled a dream for my dad and me,” said Paul. “It was a perfect day and what made it better yet, was I got to spend it with my dad.”
Paul and Mike spent Monday recovering and came home on Tuesday.
Given the talent on Kansas City’s roster, the Chiefs will be one of the favorites to make it to the Super Bowl next year in Tampa Bay. Paul said if the Chiefs make it, they will be there too. 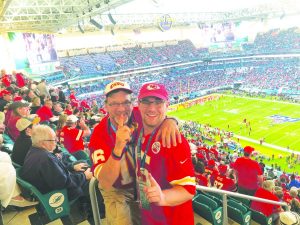 Paul Downey and his Father MIke at the Super Bowl in Miami.