The Hitchcock County Farmers Cooperative hosted their annual meeting at the TCDC community building in Trenton on Wednesday.
A crowd of over 60 Coop members and employees attended the event that included lunch and their annual business meeting.
Steve Erickson, from Lutz and Company, P.C. provided the annual Auditors Report of the Farmers Coop.
He reported that the Coop’s sales and operating revenue were down in 2019 from 2018. He said the biggest reason for the decline was due to the revenue from the wheat crop going from $439,680 in 2018 to $276,736 in 2019. He reported that the Coop remained in a very good financial position and had a net savings in 2019 of $68,786, of which $50,000 went to patronage dividends to Coop members.
The annual Board of Directors election was held. The terms for Paul Campbell and Steve Kollmorgen were up in 2020. Campbell chose not to run again and was recognized for his years of service to the Farmers Coop Board of Directors. Campbell served as the Culbertson District board member. Rick Koch of Culbertson was nominated and elected to the seat. Steve Kollmorgen, representing the Trenton District, agreed to run again and was reelected to the Board.
Coop General Manager Connie Renfro presented the annual Managers Report. Renfro reported that the company was in excellent financial condition and they had another profitable year. They also had record yields come in this year with farmers continuing to produce more grain with increasing yields. She said that harvest went well at the Coop.
Renfro said it was about a year ago that she announced her plans to retire in June 2020. She said serving as the Coop’s general manager for the past 16-years has been a good job and she has enjoyed the work.
She reported that the Coop has already hired a new general manager to take over when she leaves at the end of June. She then introduced Bret Hagan, a 2001 graduate of Culbertson High School, as the new manager.
Hagan graduated from the University of Nebraska at Kearney with a degree in Business. He has the necessary work experience to manage to Coop and moved back to family farm in Culbertson about 6-years ago. Hagan said he is very excited by the opportunity to manage the Coop and it looks like a very well run company.
Director Steve Kolmorgen took time to recognize Renfro for her years of service to the Farmers Coop. He said she has handled the company as well as any manager could have done and that their strong financial position is in large part due to the good job she has done over the last 16-years. Renfro has worked a total of 28-years for the Farmers Coop. 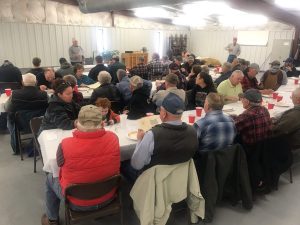