The Dundy County Stratton Lady Tigers reached the Republican Plains Activities Conference Basketball Tournament Championship game for the eighth-straight year. However, they came up short of the title after falling to a hot Cambridge Lady Trojans team in the Championship match.
The Lady Tigers reached the finals after playing one of their best games of the season against Maywood Hayes Center in the semi-finals in Trenton on Thursday.
The Lady Tigers jumped out to a 15 to 4 lead in the first quarter. The girls pushed their lead to 19-points in the second quarter before the Lady Wolves went on a run before halftime. DCS went into the break with a 25-12 advantage.
Maywood-Hayes Center struggled with the Lady Tigers man to man pressure defense in the first half.
The second half was more competitive, but the Lady Wolves could not overcome the Lady Tigers big first quarter.
DCS led 40 to 25 at the end of the third quarter and won by the final score of 55 to 39.
McKinzie Baney led all scorers with 24-points in the game. Sydney Reichert, Jessie Freeland, and Maggie Lutz each had 7-points, Sable Lambley had 6, Haylee Davis and Kaylin Brown had 2-points a-piece.
With the win, the Lady Tigers earned a rematch with the Cambridge Lady Trojans in the RPAC finals. The Lady Trojans defeated DCS just over two weeks ago.
The Lady Tigers got out to a slow start in the championship game. DCS missed several easy shots in the first quarter and Cambridge didn’t miss. The Lady Tigers were down 4 to 11 at the end of the first quarter and 14 to 33 at halftime.
The Lady Tigers weren’t done. DCS put a big run together in the second half to get back into the game. The score at the end of the third quarter was 32 to 45. With over 4:00 left in the fourth quarter the Lady Tigers were just down 4-points at 41 to 45. DCS had a chance to cut Cambridge’s lead to just 2-points, but they couldn’t get the basket. Cambridge’s Korynn Classon then scored the game’s next 7-points and the Lady Trojans lead was back to double figures. Cambridge went on to win the game, 43 to 57.
The Lady Tigers had two players in double figures with Baney finishing with 15-points and Maggie Lutz adding 10. Sable Lambley had 9-points, Sydney Reichert had 7, and Haylee Davis 2-points.
The Lady Tigers have four regular season games left against some tough competition. They will host Southwest on Friday and then travel to a good Class C1 Hershey team on Saturday. They will host North Platte St. Pat’s next Tuesday and then end their regular season on Feb. 13 at Southern Valley. DCS has a good chance to earn the top seed in the Class D1-11 subdistrict that starts Feb 18. However, the sub-district includes Cambridge, the team that has handed DCS 2 of it’s 3 losses.
Congratulations ladies on a fun and successful Conference Tournament! 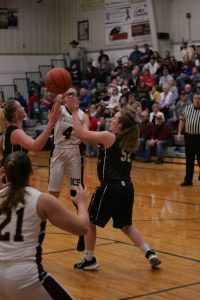 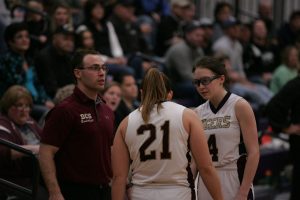