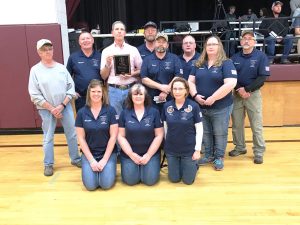 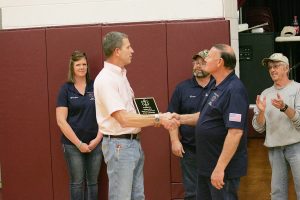 Members of the Dundy County Emergency Responders recently honored a member for his nearly three decades of service. Tony Ham was recognized at halftime of a Dundy County Stratton High School Basketball game . Ham has been an EMT for over 29-years. Fellow EMT Vince Turpin told the crowd that Ham has touched many lives with his service.“It has been an honor to know him, work beside him, and learn from him,” said Turpin. “He is a true volunteer and the type of person we all need to try and be.”
Longtime Benkelman Fire Chief and EMT Relegene Zimbelman presented Ham with a plaque as a token of the squad’s appreciation. Ham received a standing ovation from the crowd at the game. Dundy County Ambulance squad members pictured include: Heather Wiese, Shauna Turpin, Pam Reichert, Darrell Brown, Relegene Zimbelman, Tony Ham, Roger Bolio, Vince Turpin, Stan Heyne, and Crystal Daniels, and Rich Reichert.