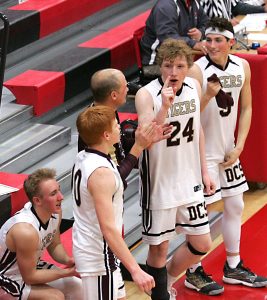 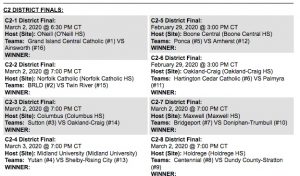 After leading by just 1-point at the end of the first quarter 8 to 7, the Tigers blew the game open.   The DCS defense allowed just 3-points over the next two quarters of play. The Tigers lead 26 to 10 at halftime and 39 to 11 at the end of the third quarter. DCS won the game 52 to 20.

The victory propelled the Tigers in into the District finals and a win away from making to the NSAA State Basketball tournament.

When all the dust settled from the other 11 Class C2 Subdistrict title games around the state, the Tigers earned the #9 seed going into the District finals.  DCS will play the Class C2-2 Subdistrict winner Centennial in the C2-8 District Championship game at Holdredge High School  at 6PM on Monday night.

Both teams go into the game with identical records at 20 wins and 4 losses on the season.

Centennial played 8 Class C1 teams during the season and won each of those games.  Two of their four losses came to a one-loss Sutton team that is #3 in Class C2 going into District finals.   Their other two losses are to Shelby-Rising City and Oakland Craig, who are also in Class C2 District final games as Wildcards.

This promises to be a great high school basketball game between two focused teams deserving to play at the state basketball tournament in Lincoln. However, only one team will make it.