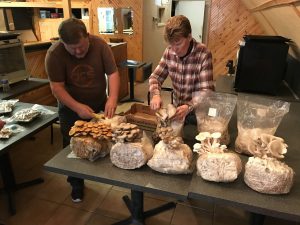 Wade Hanes, owner of Private Pantry Gourmet Mushrooms, and his employee Melissa Dailey, at his mushroom farming business in Stratton.

A downtown Stratton building that has been home to restaurants in the past, is now home to a different kind of food preparation. The newest downtown Stratton business owner is growing gourmet mushrooms in what was formerly The Whistlestop Cafe.
Wade Hanes, a 1979 Stratton High School graduate, is affectionately known as Stratton’s Mushroom Man.
Hanes said he started studying how to grow gourmet mushroom varieties in 2014. He was working on the road, bought a cargo trailer and inside the cargo trailer built a grow room. “It allowed me to try and perfect these techniques of growing the mushrooms.”
Earlier this year, he decided to expand into a building in Stratton and by February he had settled on moving into the old Whistle Stop Cafe building that had been vacant for several years.
In the meantime, Hanes was purchasing soybean pellets that he uses to grow the mushrooms from Stampede Supply in Stratton. Hanes graduated high school with Jimmy Dailey, who owns Stampede Supply with his wife Melissa. Melissa became interested in Hanes’ new business and as it happened, he was looking to bring someone into the business to help. He also hired another person.
They spent a great deal of time cleaning the former restaurant building. Growing mushrooms requires a very clean and sterile facility.
He grows the mushrooms in bags that contain a substrate material and the mushroom spores. The substrate consists of saw dust and other materials that serve as the host materials in which the mushrooms are grown. The substrate is precisely measured and put into the bags. The bags of the substrate material are then sterilized in large pressure cookers. “The main thing that is slowing us down now is the ability to sterilize mass amounts of substrate. Pressure cookers can be dangerous,” he said. “We do eight to 12 pots a day, but that only gets us 32 to 48 bags and that takes time.”
Once the bags are sterilized and cooled they go to an inoculation room that has a filtered air purification system where the mushroom spores are added to the bags. Hanes explained that mushrooms are grown in what is called the “masters mix”. “It works pretty good, but it has to be sterile,” he said.
From the inoculation room, the bags go to the fruiting room where they start to grow. After a few days the bags are moved inside a large train cargo container that is located behind the building. Hanes insulated the container and installed a air humidifier system that he made himself. The atmosphere inside the container is at about 65 degrees and 95% humidity. The bags sit on shelves where the mushrooms grow until ready to harvest. Hanes grows several different varieties of mushrooms including Blue Oysters, Chestnuts, and Black Kings. Each variety takes a different amount of time to grow, anywhere from three to six weeks to harvest.
Hanes’ business was just starting to take off as he was supplying mushrooms to the Coppermill Restaurant in McCook and some specialty food markets in Colorado. Then the COVID-19 Virus hit and all but shut down those businesses. Now, while he waits for business to return to normal, he is dehydrating mushrooms and vacuum packing them.
He still has a few customers who are buying fresh mushrooms and the dehydrated packaged ones. Once restaurants open their dinning rooms and other markets return to normal, he hopes he can expand his sales to more of those businesses.
Hanes also plans to have regular business hours in Stratton where people can come in a buy the fresh mushrooms and other produce. They are going to sell fresh garden produce from a large garden they are preparing to plant in the next few weeks.
Hanes, who works in the oil business in Texas, says he is getting close to retirement and he hopes his mushroom farm business will grow enough to provide a retirement income. He also just loves growing the mushrooms, which kind of started out as a hobby, and has the potential to be a thriving business.
Hanes is getting ready to head back to Texas to his oil field job. He says Dailey will handle the mushroom farm while he is away.
In the meantime, if anyone wants to try the fresh mushrooms, all they need to do is contact Melissa Dailey or Hanes. Hanes can be reached at 402-278-0155.
They are working at the mushroom farm daily and would be more than happy to meet with people.