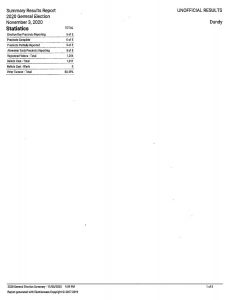 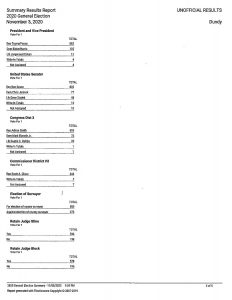 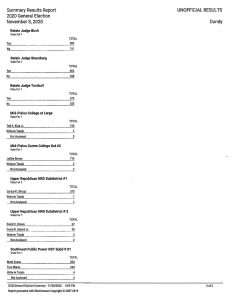 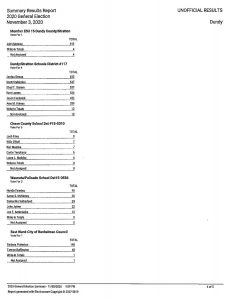 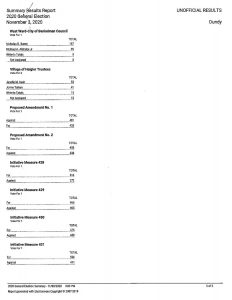 The  U.S. Presidential race remains to close to call Friday morning, but Democratic candidate Joe Biden is near a victory. In the meantime the Dundy County and State of Nebraska results were all but finalized on Election night. Dundy County had a voter turnout of just over 80 percent of the 1,256 registered voters. The total number of ballots cast in the county was 1,011. ­

In the local races of interest the Benkelman City Council, Southwest Public Power District, and the Dundy County Stratton School Board of Education will have some new faces next year. In the Benkelman City Council East Ward race challenger Barbara Pinkerton defeated incumbent Tammy Buffington by a count of 140 to 42. In the West Ward Nicholas Baney won over Michael Aldridge 157 to 99.

In the Dundy County Stratton School Board of Education there were four seats available. When the unofficial votes were tallied from Dundy and Hitchcock Counties the three incumbents, Shad Stamm, Kent Lorens, and Jason Frederick were all reelected to the board. The final seat will be filled by new member Jordan Stroup, who had the largest amount of votes in the election. The final unofficial vote talley (Dundy and Hitchcock results added together) were: Stroup 770, Lorens 742, Stamm 691, Frederick 623, Scott Stahlecker 610, and Amy Haines 420.

The Southwest Public Power District Subdistrict #01 race between Brent Evans and Troy Wiese came down t to the wire The final tally gave the race to Evans.

In some statewide races, voters approved a trio of ballot initiatives aimed at allowing casino gambling at six licensed horse racetracks across the state and devoting some of the proceeds to property tax relief. Nebraska U.S. Senator Ben Sasse was reelected to another term. Nebraska Third District Congressman Adrian Smith was also reelected.

The complete list of Dundy County Unofficial results are as follows. 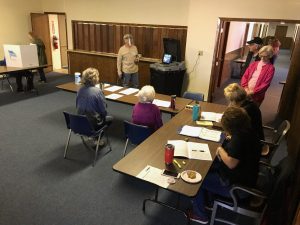