The staff and residents of the El Dorado Manor Nursing Home and Assisted Living Center are celebrating the facilitie’s 50th Anniversary.

El Dorado Manor became a reality in 1970, through the perseverance of business people and private citizens who petitioned the Village Board of Trustees to approve bonds for the construction of a nursing home.

A special election was held on January 26, 1970, with a record turnout. The bond issue of $360,000 for construction of a 53 bed nursing home was approved by an overwhelming margin, 247 to 43. Land for the Nursing Home was donated to the Village of Trenton by two of Trenton’s citizens, H.B. Chipman and Virle Burd. Clearing of the land began in March of 1970. Bids for the construction of the home were opened on May 7, 1970, and construction began two weeks later. On March 2, 1971, the Trenton Village Board passed Ordinance No. 277, which provided for the appointment, powers and duties of the El Dorado Manor and Assisted Living Nursing Home Board and delegated the authority for the operation of the home to the newly formed Board. On March 7, 1971, almost a year from the day the clearing of the site had begun, the home was dedicated and an Open House was held. The first resident, Mrs. Hannah Hedke of Trenton moved into El Dorado Manor the next day. October 16, 1977, was a special day when the first wedding took place at the Home with Oscar Weston, who turned 87 on that day, and 88-year-old Elizabeth Knight, were wed. The wedding made radio headlines in Paul Harvey’s “The Rest of the Story”.

Jaynee Janousek, El Dorado Activity Director, has worked at the facility for almost 37 of the 50-years. She explained that because of the restriction of visitors due to the COVID-19 Pandemic they weren’t sure how they would celebrate the anniversary. While they are unable to hold a public open house to mark the occasion, they are having a card shower and hope people will take the time to send them an anniversary card. “We are limited in what we can do,” said Janousek. “We are hoping to get lots of cards so we can make a special collage to share with the residents and staff.” She also will share the collage with the community through her newspaper and through social media. El Dorado Manor is one of the community’s biggest employers. The facility’s residents are from across the county and area and its staff are committed to ensuring the best possible care is given. Janousek said two-years ago they didn’t know if El Dorado would survive, but it did. ‘It’s a very important part of the community,” she said.

Over the years, El Dorado Manor has continued to grow. Discussion was held during 1984 concerning the possibility of the addition of 20 residential care beds, remodeling the kitchen and dining facilities and other updates to the facility. The plan approved and revenue bonds were issued in December of 1984. Construction was completed in 1986 and in July of that year, the Residential Care Facility was approved for admissions. Eight residents were admitted on the first day of operation. El Dorado Manor Board applied for and received a grant from the State of Nebraska to build seven new assisted living units, a separate dining room and remodeled one current assisted living unit. El Dorado Manor had to give up eight licensed nursing home beds to receive this grant. This new Assisted Living wing opened September 2002. El Dorado Manor and Assisted Living has become an important part of the Trenton community and Hitchcock County, providing a service to the citizens of our area the opportunity for employment, and many other economic and social benefits. Presently, El Dorado Manor and Assisted Living is licensed for 40 Skilled Care Nursing Home beds and 18 Assisted Living beds and provides approximately 60 jobs, making it one of the largest businesses in the area. 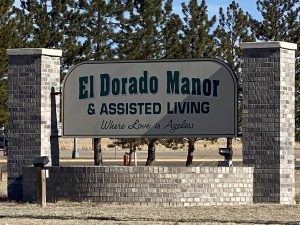