The Dundy County District Courtroom was packed for the Dundy County Planning and Zoning Commission’s meeting in Benkelman on Tuesday afternoon. The crowd of around 80 people came for the planning board’s public hearing and action on a Conditional Use Permit application from Blackshirt Feeders LP to build and operate a one of a kind, 100,000 head, beef cattle feedlot on the county line several miles west of Highway 61 in nothern Dundy County.

Dr. Eric Behlke, a Dundy County High School graduate who continues to be a partner in the family farm and ranch operation near Benkelman, is the manager of Blackshirt Feeders. The prinary owners of the feedlot are Dr. Behlke, Dr. Calvin Booker, and Dr. Kee Jim, three cattle veterinarians who are directors for Feedlot Health Managment Services by Telus Agriculture based in Canada. They are partners in the ownership of eight other large-scale cattle feedlots in Texas, New Mexico, and Colorado, as well as just as many in Canada.

The planned feedlot would be a one of a kind facility in the United States and one of. if not the largest, cattle feeding operation in Nebraska. Blackshirt Feeders has hired Settje Agri-Services and Engineering Inc of Raymond, Nebraska to design and build the new facility. Dean Settje, founder and president of the of the engineering company presented information about the new feedlot to the County Planning Commission at the meeting on Tuesday.

During his presentation he explained that the biggest thing that will set the facility apart from other tradional feed lots is that this one will include a Roller Compacted Concrete (RCC) Surface throughout the facility, inlcuding the cattle pens. All of the manure and water runoff will be collected, held, and treated. Manure will be marketed for fertilizer. The water holding ponds will be over-designed well above regulatory requirements with special liners to hold a 100-year rain event to provide maximum protection of the ground and surface water. The concrete surface would also help in controlling odor, dust, and other nuisances from the facility.

As part of the project, Settje explained, that they will have to purchase and retire at least six irrigation pivots from nearby landowners to have enough water to operate the facility. He said the feedyard will be a “net zero” water user, meaning they won’t use any more water than the irrigation pivots would have used in a year for farming.

Some 30 local residents spoke during the pubic hearing of their support, opposition, or neutral stance.

Many of those in support of the feed yard talked about how the facility would provide a shot in the arm for the local economy to help small businesses and bring more jobs, people, and youth to the local communities and schools. At capacity the feedyard is projected bring 85 new jobs.

Those in opposition to the facilty were concerned about the impact the estimated around 40,000 semi-truck traffic would have on the county roads leading to the feedyard. They were also concerned about how it would harm the groundwater and how much water the feedlot would use. The meeting lasted about four and half hours.

Once the public hearing was closed the Planning Board held a short discussion on the application. It was pointed out the only job of the planning commission was to determine if the proposed feedlot met all of the county’s zoning regulations for such a facility. Blackshirt Feeders does meet those requirments.

The Planning Commission unanomously approved a motion to recommend the approval of the Conditional Use Permit to the Dundy County Commissioners, with a list of 13 stipulations that included having a road maintainence contract with Blackshirt Feeders. 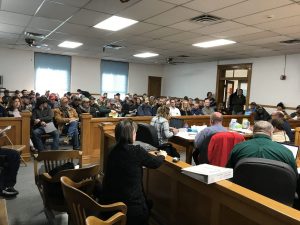 The County Commissioners will make the final decision on the approval of the Conditional Use Permit. If the county and state permitting is approved, construction could start this spring. It is expected to take several years to reach capacity.