The courtroom was about half full of people for the meeting which lasted about 40 minutes.

Board Chairman Scott Olson opened the meeting at 1:30pm followed by board member Richard Bartholomew and Olson asking a few questions directed to Dean Settje of Settje Agri-Services and Engineering Inc., the company hired by Blackshirt Feeders to design and build the new facility that was proposed to be built in northern Dundy County along the Chase County line.

After the questions were answered Bartholomew said he wanted make some comments regarding the proposed feedlot.

Bartholmew started by saying he felt he could not make an objective decision about the feedlot, but rather his decision would have to be subjective. “Unless you are a machine, that is really not possible,” he said. “Everyone is influenced by their families, their education, and their experiences, life in general,” he said. “So, for me trying to make an objective decision here, I am going to say I cannot.”

He said he has wavered back and forth on the issue over the last few weeks. “ I wake up in the night and I think about it and I get up in the morning and I make notes and then I change my notes to what I think about the next day,” he said. “With that said, the magnitude of this facility is huge, it would cover the City of Benkelman.”

Bartholomew talked about the impact that the facility could have on the county’s infrastructure and services, especially road maintenance. “We are very limited in what we can do through the budgeting process and there are some major changes at the state level on how we can budget money,” he said. “I have difficulty here on a personal basis accepting that bigger is better. Our whole country and world is in this phase, for 40-years at least, if you get bigger or you get out.”

Bartholomew said he is on the other side of that fence and would rather have five, 20,000 capacity lots than one 100,000 head facility.

At the end of his comment Bartholomew made a motion to deny Blackshirt Feeders application as presented.

That motion died for a lack of a second.

Following the failed motion, commissioner Jerry Fries commented on the issue. “ I sat here and listened to all the emotional testimony and I understand this is very emotional on a lot of levels to a lot people,” he said. “But, Bart (commissioner Bartholomew) said the trend has been bigger for the last 40-50 years  and that is true. We used to haul a lot of hay to Cargill and the last I knew they were up to almost 100,000 head.  Five Rivers and the big feedlots in Texas. It is getting bigger or get out. It is kind like the dairy farmer with 25 cows, it is nice but you can’t make it, the margins are so thin.”

Fries said looking at all the benefits and the disadvantages, it was his opinion, that “we  could do something for the county or we die”.   Following his comments Fries made a motion to grant the Conditional Use Permit for Blackshirt Feeders.

“I suppose I am the one supposed to second it”, said County Commissioner Chairman Scott Olson. “I have been here for all these meetings too and some are neighbors, so I am not going to second that motion either. I didn’t second either motion.”

Commissioner Bartholmew then said he would second Fries motion to grant the CUP application.

Roll call vote was made by Pam Reichert, the Dundy County Zoning Administrator.   Olson voted No, Fries voted yes, and Bartholmew voted No.

“So, we are done,” said Chairmen Olson.

Discussion after the vote

Following the vote commissioner Jerry Fries posed the question, What good is zoning? “If they meet all the zoning requirements, we throw it out,” he said. “Have we just thrown out our entire zoning plan?”

“But, they met the zoning requirements,” said Fries. “Do we need to go back in and change our zoning.”

“Next year, I bet we are going to have to raise (the county budget) eight the ten percent, just in the county,” said Olson. “If we ad on all these conditional uses and we have to help with roads and right of ways, and help with all this other stuff, its going to raise more.  I just don’t see… and that is why…” 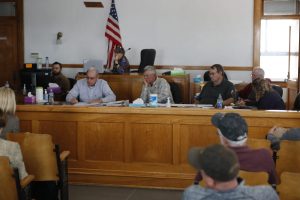 “ I think we have set a terrible precedent,” said Fries.