Editors Note: This article was published in the Hitchcock County News Jan. 12 edition.

Born on, February  11, 2022, Oliver Forbes was born at  8 pounds and 9 ounces in size, but at just a few hours old he had to be flown to Omaha Children’s Hospital because of low oxygen levels and the doctors wanted to check his heart . Oliver’s parents are; Joslyn ‘Pierce’ Forbes, a 2015 graduate of Hitchcock County High School, and Tyler Forbes, a 2013 graduate. They have been friends since 2011 and were married in 2021. 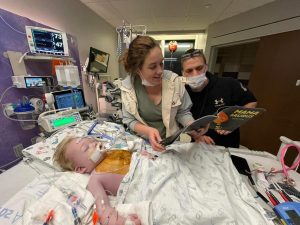 Baby Oliver with parents Joslyn and Tyler Forbes at the CCU Children’s Hospital in Omaha, NE. 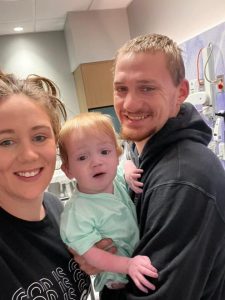 Hitchcock County News, Jan 12, 2023……. A week ago, baby Oliver, son of Joslyn and Tyler Forbes, underwent another surgery on his heart.

The catheter showed that his right ventricle was squeezed tight and very very small, the echo showed that his left ventricle is pumping greatly. But the right isn’t pumping that well. They put him on ECMO (ECMO is a form of life support for people with life-threatening illness or injury that affects the function of their heart or lungs.

ECMO keeps blood moving through the body and keeps blood gasses (oxygen and carbon dioxide) in balance.) He will be paralyzed and sedated to give his heart some rest.

The doctor said they weren’t able to do the full repair. Oliver is only the 2nd person he’s ever seen with this complex of a heart condition. He said it’s all up to God and Oliver.

The following day Oliver’s heart relaxed but his valves were “leaky”. His blood was just going out as fast as it’s getting put in his body. So they did another procedure to try and help his heart.

They were able to do a “repair” and help him be more stable while on ECMO. He had another procedure that night he’s stable and his numbers are looking a lot better his Brain waves and all organs look great. Oliver has since developed a small bleed around his brain. The Neurosurgeon is keeping a close eye on him. they want to keep a very very close eye on him. He’s passing all of his “tests” with flying colors. He is having regular CT’s to monitor this.

Lasix is doing well and they have been able to avoid dialysis up to this point. Two days ago they did the trial run. He did well going down on ECMO, but when they clamped him to see if his heart could function all on its own he didn’t much like that. His right ventricle didn’t function like it did on a low flow and the left started to function poorly. They’re going to keep him on ECMO and we will try again.

As of Wednesday morning (Jan. 11) , baby Oliver is still on ECMO. They were going to try and take him off today but decided to wait. His lungs are “cloudy” and they think he needs more time. He’s back on a paralytic drip to keep him from moving around.

The emotions are a rollercoaster for the Forbes family So many ups and downs. So many ”why God”. Joslyn said, So many emotions. I’m sad, defeated, and happy all in one. Oliver is still here with us! He’s still fighting this fight and I couldn’t be more grateful. As I’m just sitting in his room next to my sweet sweet boy just lying and resting in bed, I feel somewhat happy. I’m not sure how to explain it, it’s like God is hugging me and my family telling us it’s ok. “No bad news is the best news”

Joslyn says today she is pretty frustrated. “Today was the day we were supposed to give it a “real” trial. Everyone seemed so confident yesterday. But all in all we’re doing okay. Tyler has been the rock through all of this. He’s so strong. I’m just ready to see my baby sitting up and playing again.”

The Forbes Family can use all of the prayers they can get. If you would like to send cards of encouragement they will reach the Forbes family at : Oliver Forbes 2012 CCU Childrens Hospital 8200 Dodge Street, Omaha Ne. 68114