Baby Oliver Forbes is still in the hospital in Omaha. But people at home are lending a hand however they can to help his mom Joslyn and dad Tyler be able to be by his side as he fights his battle.  Joslyn’s aunt Lynda Redden wanted to do something to raise money for them.

“Everyone loves runza’s so I messaged Kayla Hodges and Kayla’s been helping me with it,” she said. “My first goal was to hit 1,000 runza’s ordered. I hit that in two hours, so it got bigger than I expected. I finally had to shut off the orders yesterday because I am hoping to get the orders all done this month and we were getting to the point that I didn’t know if I could do that.”

So far 291 dozen runzas have been ordered and about 1500 runza’s have been completed. The majority of the work has been done in the ambulance barn. It’s been mostly Todd Hovey and Kayla helping but there has been four or five other people also stop by to help.

Lynda says the late nights and weekend work hasn’t been to bad, “I couldn’t imagine having to leave my child in the hospital, or coming home to try and pay the bills so I put myself in their shoes and I just don’t think any family should have to make the decision to leave their child in the hospital.”

Lynda says she has only been able to do it on certain evenings because she runs the Hub in McCook. There has also been a lot of people volunteer to help but the days that we have been making them there have been ball games and also Lynda adds that you don’t want to get to much help because then you get backed up and are just waiting on the ovens.

The proceeds from the runza’s after costs are going to help Joslyn and Tyler stay in Omaha with their son. Lynda says a lot of people have donated hamburger and they have used us what has been donated. People have also donated things like cheese and sauerkraut.

In addition to the generosity of supplies several people have also been extra giving when they have picked the runza’s often leaving a little extra money.  Lynda says she just wants everyone to know how much the help is appreciated. 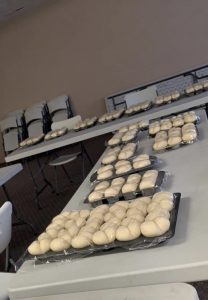 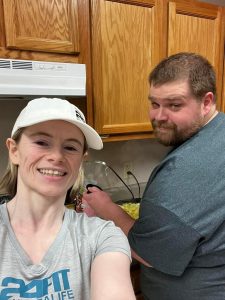 If you would like to donate to Lynda to help the Runza’s you can help by calling Lynda at 479-264-0378.  Continued prayers for this little boy and his family.