The DCS Tiger’s defense and Special Teams came up with the big plays to spark the football team’s hard fought triumph over the Fullerton Warriors in the second round of the Class D1 playoffs on Wednesday night.  The game came down to the final possessions, but in the end it was the Tigers offense taking the final snap in their victory formation to move on to the third round, 20 to 18.

A great crowd of DCS fans made the over four-hour trip to Fullerton to see the game on a cold night in central Nebraska.  The Dundy County Stratton supporters may have even out numbered the home team fans in the stands.

The #2 seed Fullerton got on the board first with a touchdown on their second possession of the first quarter to take a 0 to 6 lead.

The Warriors kept DCS’ offense contained through much of the first half, but the Tigers’ didn’t help their cause with numerous procedure and holding penalties that kept them behind the chains . Fullerton was able to move the ball on offense and was on the move again late in the first quarter.  The Tigers defense came up big when junior Lincoln Waters made a shoe string interception of a pass that went off the hands of a Fullerton receiver near the Tiger’s ten yard line.

Fullerton put another good drive together with under four minutes left in the half.   With the Warriors inside of the Tigers’ 20-yard line, senior Lane Shillington got the quarterback forcing a fumble.  His classmate Reice Haines covered the ball to turn away the Warriors once again.

After the turnover, the Tigers offense got things going with their best drive of the game.  The Tigers reached the goal line and scored from the 1-yard line to tie the game 6-6.  That was the score at the break, with the Tigers to get the ball first in the second half.

DCS took their first possession of the third quarter right down the field to score with 8:32 left in the period.  DCS averted disaster on the goal line as Fullerton caused a fumble on the play. The ball was covered in the end zone by Serbando Diaz for the score and a Tiger 12 to 6 lead.

The Tigers special teams came up with the next big play of the game.  On fourth down and a poor Fullerton punt snap, Diaz was able to get to the kicker before he could get the kick off.  Fullerton’s kicker had to try and side step Diaz and then try to kick the ball.  By then, Reice Haines was able to get a hand up to knock the kickers line drive punt attempt down.   The Tiger recovered inside the 15-yard line.

With their backs against the wall, Fullerton answered with a drive that included the conversion of a third and 25 yards to go for a first down.   The Warriors cut DCS lead to 20 to 12 with 8:21 left in the fourth quarter.

DCS got the ball back and was needing to get the momentum back.  The Tigers had just got a first down after a 4th and 1 near midfield, but on first down fumbled and Fullerton recovered.  The Warriors  turned the turnover into points scoring with 5:32 left in the game to make the score 20 to 18.  DCS’ Shillington made a big lay on the 2-point conversion try by sacking the quarterback to preserve the Tigers lead.

DCS’ offense got the ball back, but Fullerton held and forced the Tigers to punt.  On the kick, DCS was flagged for their third targeting penalty of the game as the Fullerton kick returner was down.  The Warriors had the ball near midfield again.  DCS’ defense came up with yet another big play.  The Warriors went deep but DCS safety Quade Myers picked off the pass.

DCS’ offense got the ball with under 3:00 left and was able to move the chains and the ball down the field to take time off the clock.  Fullerton’s defense was able to stop the Tigers near their own 30-yard line with just 42-scond left.   DCS’ defense was up to challenge and they stopped the Warriors on 4th and 1 to take the ball over with less than 10-seconds left.   The Tigers offense finished the game in victory formation to get the hard fought win, 20 to 18. 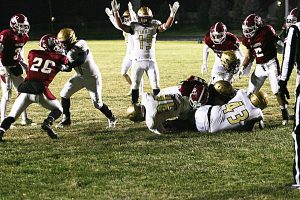 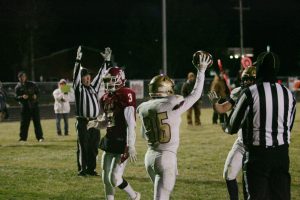 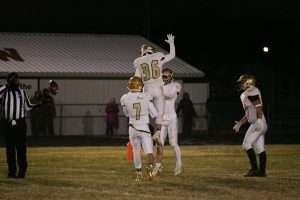 For the second straight year the Tigers head to the Class D1 State Quarterfinals.  For the first time ever, DCS will host a quarterfinals game. The Tigers will play the 9-1 Arcadia-Loup City Rebels.  Their lone loss of the season came against Fullerton in both team’s first contest of the year.   Kickoff for the game is at 4:00PM on Tuesday at Tiger stadium.  The DCS schools will dismiss 45-minutes early on Tuesday and buses will run accordingly.