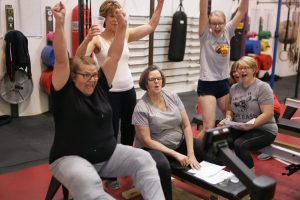 Marilyn Zarkowski (left) and Savannah Merklin (right) celebrate after Zarkowski gets a perfect row in the final frame to win the semi-finals match of the Rowling Tournament at the Weight Buffet on Saturday. Also pictured and helping them celebrate is the other semi-finals team of Jeanene Burrows and JoAnne Decker. Others pictured are Candy Merklin and Jen Sargent.

The was plenty of cheering and excitement at the Weight Buffet Fitness Center in Benkelman on Saturday.
The center was host to an event to raise funds to provide Thanksgiving meals for local families of need.
The Weight Buffet, the Benkelman Pharmacy, and Grace Market worked together on the event.
Nic Leiting, owner of the Weight Buffet, said the goal was to raise enough money to provide 40 Thanksgiving meals. They surpassed that goal.
The Thanksgiving fundraiser was originated by Jason and Melissa Schack, owners of the Benkelman Pharmacy in 2016 and was called the “Turkey Trot”, which involved a 5K run/walk.
The mission of the event was to raise money to provide Thanksgiving meals to local families, while also promoting healthy exercise and fitness. The Turkey Trot was held in 2017 and 2018, but this year the exercise and fitness activity went indoors. Instead of walking and running the activity was a rowing competition that featured a format of bowling.
What do you call an activity that combines rowing and bowling? Rowling of course.
A total of 18, two-person, teams participated in the Rowling tournament. It was a double elimination tournament with each match set up like a ten frame bowling game. Each frame had one team member using a rowing machine to try and row 100 Meters. For every meter over or under the 100 Meter goal, that was your score for that frame. The team with the lowest score at the end of ten frames was the winner. The competitors were as young as a first grader to retirement age.
It was a friendly competition where no one really lost. It was exciting and spirited, especially when someone hit and perfectly stopped at the 100 Meter mark. The winners do get bragging rights for a year.
The team of Marilyn Zarkowski and Savannah Merklin won the tournament. Second place was Dennis and Barb Pinkerton.
“It was a great turnout,” said Leiting. “We had 36 participants with 10 additional donations.”
Each entry fee of $25 paid for a Thanksgiving dinner that will be delivered to families in need.
Leiting said he wanted to recognize those who participated and those who donated money. “ Thank you all for your generosity and participation.”