The most important thing you can do with your children is to eat dinner with them.
On Wednesday morning, Hitchcock County Judge Ann Paine visited the Hitchcock County Elementary School in Culbertson; the topic was “Come to the Table Nebraska.”
Judge Paine is promoting the “Come to the Table Nebraska” program, a grassroots initiative coordinated by Nebraska Court Improvement project that encourages families to eat together. The program is in conjunction with the Through the Eyes of the Child Initiative, a Nebraska Supreme Court program that asks judges to take an active leadership role in improving the court process in child protection cases.
Under the leadership of Chief Justice Michael Heavican, the Through the Eyes of the Child Initiative is a multidisciplinary network of local teams that work to improve systems processes. It creates a forum for local child welfare and juvenile justice stakeholders to collaborate with each other in their efforts to improve issues in their communities’ juvenile court systems as well as communicate with other teams and stakeholders across the state to identify systemic barriers and work on solutions.
Federally funded by the Nebraska Court Improvement Project, the Through the Eyes of the Child Initiative is comprised of over 25 local teams across Nebraska, each led by a lead judge. The local teams are guided by the Resource Guidelines published by the National Council on Juvenile and Family Court Judges which sets out best practice standards for the juvenile court processes.
According to the Come to the Table Nebraska program research shows that family dinners build strong family connections and build stronger bonds. Judge Paine told the Hitchcock County Elementary students to make a plan to eat together once or twice a week. She said it doesn’t need to be at the table, make it a picnic.
Judge Paine handed out placemats for the students to take home. The placemats included wording for conversation starters such as: “Tell me about your favorite childhood memories”, or “What is your favorite places in the world and why”. In addition the placemat gives five different reasons why families should eat together. Research shows eating together boosts vocabulary, increases test scores, provided better nutrition, lowers stress and high-risk behaviors and encourages strong family connections.
Judge Paine, who has jurisdiction over local juvenile court, said she sees a lot of families in juvenile court and building stronger families are a preventive measure for some of the things she sees in the courtroom. 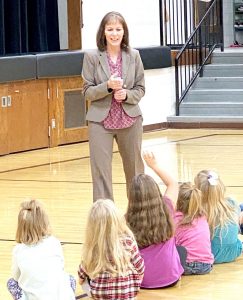