The Hitchcock County boys and girls basketball teams are halfway through their seasons and have mirror image records with seven wins and four losses.
Both teams also won one game and lost one game this week.
The Falcon boys and girls teams got easy wins at home over Wauneta Palisade last Friday. The girls won 70 to 49 and the boys 64 to 18.
In the girls game the Lady Falcons and Lady Broncos were tied 15 to 15 after the first quarter. Hitchcock County took control of the game over the next two quarters, out scoring Wauneta Palisade 41 to 20 in that span.
The boys dominated their game from the opening tip owning at 19-0 lead at the end of the first quarter and 33 to 4 advantage at halftime.
The Falcons were on the road for tough contests at Dundy County Stratton on Tuesday. The Lady Falcons fought back after falling behind by a score of 19 to 2 early in the second quarter to make a game of it. The Lady Falcons trailed by just four points at halftime 18 to 22.
Hitchcock County kept the game close in the third quarter, but couldn’t get their offense on track. They trailed 32 to 39 at the start of the fourth quarter. The Lady Tigers shot better from the outside and pulled away in the fourth final period to win, 43 to 57.
The Falcon boys put a good fight against the one loss DCS Tigers. The Tigers won on a buzzer beater in a game the two teams played in early December.
The Falcons had a hard time getting their offense on track in the first half, but the Tigers were called for fouls early and often in the first half. The Falcons trailed 5 to 12 after the first quarter but kept the game close in the second quarter thanks to some good shooting from the free throw line. The score at half was 17 to 25 with DCS on top.
Hitchcock County only managed 7-points in the third quarter and trailed 24 to 38 going into the in final period.
The Falcons got the game back into single digits midway through the fourth quarter. However, DCS was able to go on a 6-point run to push their lead back to double digits with less then two-minutes to play. The Tigers went on to win 40 to 52.
The Falcon boys and girls teams will host the Alma Cardinals on Friday, in what should be two competitive games. 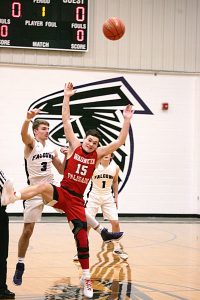 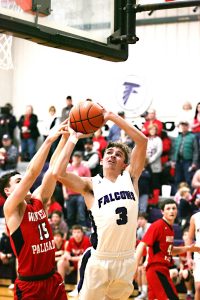 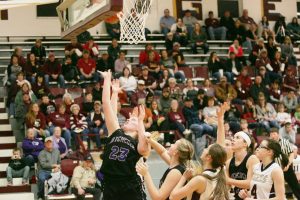 The Road To Lincoln….DCS Tigers Basketball Is In!

Tigers One the Verge Of Schools First State Title