Whether stop signs, county road marker signs, dead end and turn ahead signs, or any other road sign. They are not for target practice. They are not meant for yard decorations, man caves, garages, and dorm rooms.
Even though it is a criminal violation to vandalize and/or steal them, it is a continuing problem in the county says Rick Delin, the Dundy County employee charged with maintaining and replacing county road signs.
It’s not a new problem but Delin said dealing with road sign thefts and vandalism is taking up more and more time. He said he has had to replace eight stop signs alone in the last two months. Last week he had to replace two missing stop signs at an intersection that were directly across from each other. Delin said he has even started double nutting signs to the posts, but that doesn’t even deter the thefts. It is an expensive and dangerous problem to have. Signs are not just being stolen. The vandalism is not limited to physical damage. Many signs are replaced because someone painted an inappropriate word or pictured that could not be removed or, in some cases, signs were found riddled with bullet holes.
Permanent metal signs can cost hundreds of dollars to replace, especially when labor and cost of materials is figured in. Beyond cost, Delin said, the issue also involves the public’s safety. Someone missing a stop sign, where they are not stopping because they are anticipating the other side stopping, could create a serious accident.
Dundy County road workers and Delin do their best to locate damaged and stolen signs, but with over 600 miles of roads in the county, the public can help in the sign vandalism problem. If you see someone stealing or damaging a sign please call a county commissioner, the Dundy County Clerk, or Delin, who also serves of the County Weed Superintendent. People are also asked to call and report missing or damaged signs so they can be replaced. 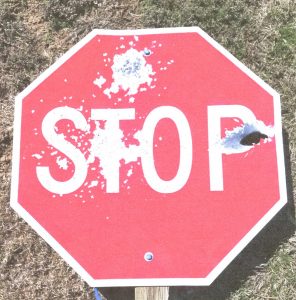