Benkelman residents didn’t get much sleep Thursday night after a wind driven wildfire reached city limits in the middle of the night.  The fire resulted in Emergency Management issuing an evacuation order for the city shortly after 3AM.  The Haigler American Legion was made available for people to stay in if needed.

Up to 18 fire departments battled the blaze the started shortly after midnight several miles northwest of Benkelman.  The fire call came in about 12:30am. Northwest winds gusting over 50mph quickly spread the flames toward the community.   By 2AM smoke had inundated the western part of the city with near 0 visibility in some neighborhoods.    The large orange glow of the fire light up the night sky.

Fire fighters bravely battled the blaze as with below freezing temperatures and very cold wind chills.   By about 3:30AM the flames were nearing the city limits.  Flames swept through the airport reaching the edge of the Circle B Motel and the Skyline Grill Restaurant, then just across Highway 34 near Owens Ace Hardware. However, fire crews were able to keep the flames from destroying any businesses or homes. There were reports of some damage near Circle B to some sheds behind the hotel. Flames reached evergreen tree wind breaks on the back side of the Circle B and behind the Stan and Phylis Jones house on the north side of the Highway. Flames were clearly visible maybe 40 feet into the air and the fire burned through the trees.

Firemen battled the blaze and protected buildings and homes through the night.  The evacuation order was lifted and the all crew was given for people to return to the homes at at 7:15AM.

The Benkelman Post will have more on the fire in the next issue of the paper. 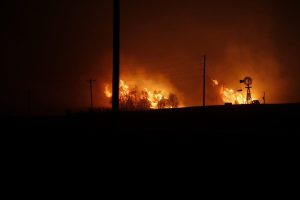